David Spicer has poems in Alcatraz, The American Poetry Review, Chiron Review, Easy Street, Gargoyle, Midnight Lane Boutique, Ploughshares, Scab, Tipton Poetry Journal, and elsewhere. He is the author of Everybody Has a Story (St. Luke’s Press, 1988) and five chapbooks. He has been nominated for a Pushcart once and Best of the Net three times.

Everybody heckles Wild Bill
Hiccup: his Harley sputters,
growls, and shakes every time
he starts the beast. He named it
Torpedo because it’s faster than
a gorilla chasing a goat.
I thought that made no sense,
any more than his braided
green-blonde hair down a denim
jacket with a chocolate cake
under the Eiffel Tower patched
on its back. He’s a loner,
complains and brags at the same time
about no gang wanting him.
Besides, he earned his doctorate—
on Andrew Johnson’s impeachment—
in Arizona, where, he says,
he doesn’t need an umbrella.
Something about Bill nauseates
most people, including me:
he eats grasshoppers if it rains,
which isn’t often—thank the thunder—
and claims to sleep in a different
junk yard every night, wearing his
white cowboy hat to his Church
of the Wayward Bikers. He’s the only
member, besides yours truly,
and a couple of his students
wanting As in his course, “Abraham
Lincoln: the First Elvis Presley.”
I wouldn’t go, but I have no choice:
I’m his son.

When I was twelve, we toured the Badlands,
having won the vacation in a raffle sponsored
by the owner of the vending machine outfit.

I studied the granite faces and their cheekbones,
watching my blonde stepmother Carol and two
Chinese girls my father loved: he French kissed

them all four hundred feet from Teddy Roosevelt.
That night the five of us slept on the straw
mattress in the purple van nicknamed Slick.

Mei and Tan spoke another language
when we approached the almond groves,
and I latched onto them because their eyes flirted

with me, their hair curling like twine at the end
of a roll, and I brooded about school when we
arrived back in the trailer, vacation over.

All Hail! David Spicer’s latest chapbook, From the Limbs of a Pear Tree (Flutter Press, 2017), is available via Amazon. Simply click on the cover image below to learn more . . . 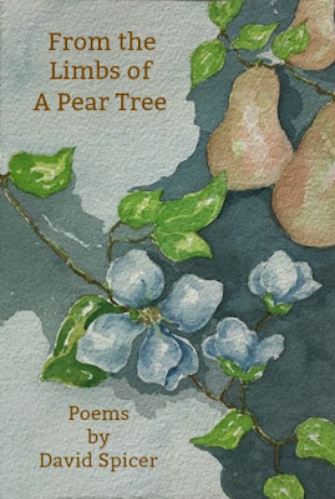